Day 2 of the 2022 French Open and we had tickets for Court Simonne-Mathieu. It was on my bucket list to watch a match on Simonne-Mathieu at sunset and I just about achieved it! It was a tricky day with the weather forecast. We made a bit of a risky decision to skip the tennis in the morning in favour of some sightseeing and having a proper lunch in Paris because the forecast was more promising in the evening. There was more play in the morning than we expected (high levels of FOMO 😂) but it worked out in the end. I love it when a plan works! Read on for highlights from a day on Court Simonne-Mathieu watching the Brits 🇬🇧.

We arrived at Roland Garros about 2:30pm with play suspended but the rain easing. We were wandering around the grounds when we suddenly realised the tarps were off on the outside courts and play was resuming. We’re so used to announcements at Wimbledon! We rushed over to Court Simonne-Mathieu where we could hear the roar from the crowd on our approach.

The atmosphere was absolutely rocking! We took in the court for the first time. Spoiler alert – it’s beautiful. More to come in my guide  post. I loved watching the rallies and trying to figure out the tactics. When watching at court level you pick up changes in the pace and the flight of the ball which aren’t as obvious watching on the TV.

This match was all about the first set. 72 minutes of gruelling, lung-busting tennis. One game had 11 deuces. Guinard, or “Manu” to the crowd, was certainly playing above his ranking of 146. The Frenchman showed impressive resilience to bounce back from losing that 11 deuce game, break back and then lead Norrie 5-4 in the first set.

I don’t watch a great deal of ATP and I haven’t seen much of Norrie so I was kind of fascinated to see him in action and kind of figure out how he’s become a top ten player. I think the game at *4-5 in the first set answered some of my questions. After losing three straight games with his backhand beginning to float long, Norrie played his most convincing service game of the match with his back against the wall. Norrie went onto win the last three games of the set and take it, 7-5. I don’t think there’s anything particularly flashy about Norrie’s game. Very solid, patient, tactically aware and bloody hard to put the ball past. He’s got quite funky strokes with the heavy topspin forehand and the flat backhand with no take-back. I think he’s one of those players who would be a pain to play against. 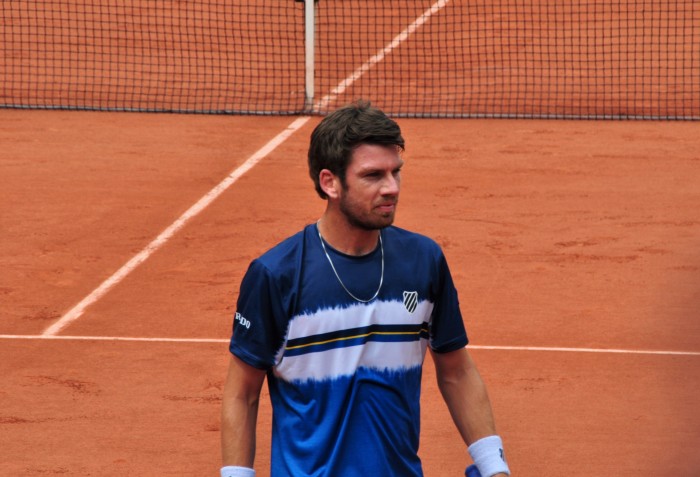 With the first set under his belt, Norrie had essentially snapped Guinard’s resistance who was already breathing heavily during the points in that first set. The final two sets combined (67 minutes) took less time than the entire first set! Norrie was absolutely relentless. I think I heard on the Tennis Podcast a while back that Norrie has an exceptional lung capacity, akin to a deep-sea diver, and that was certainly evident here. He didn’t appear tired on the surface and looked like he could happily go on for hours.

The final two sets were a bit of a formality. Guinard never threw in the towel though, in fact he threw in a couple of underarm serves in the third set, the latter barely reaching the bottom of the net. The third set still had its moments. Norrie far too strong in the end. We enjoyed cheering on a Brit and being against the majority of the crowd. It was a fun atmosphere to be a part of.

This match was the highlight of our trip. Raducanu was top of my list (I actually wrote out a list on a sticky note 😂) of new players I wanted to see. We had planned the day all around watching Raducanu so were thrilled with our luck that this was on our court and the weather just about held up. We witnessed all the seasons in this match. It began overcast, turning to heavy drizzle and then ended with sunshine and clear skies! The weather was a pretty accurate depiction of how this match unfolded. 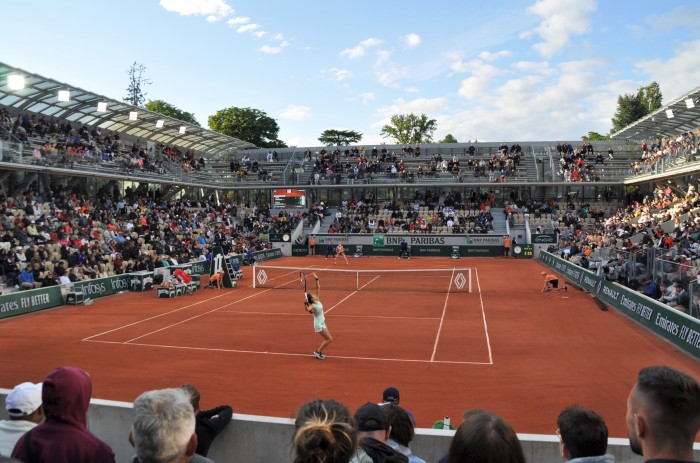 It was a quiet, mostly flat start with the energy dissipating from the previous match as most of the crowd took a breather. The constantly threatening clouds overhead produced some drizzle during the middle of the first set. Raducanu questioned with the umpire whether they should be carrying on. Eventually they did pause when the drizzle intensified and on came the lights. It’s the first ever time that I’ve watched a tennis match in the rain! It’s also super annoying when people put their sodding umbrellas up 😂.

After a brief stoppage, play resumed. Raducanu did have an early break but the halt in play went against her and Noskova broke back immediately. Noskova began to expose Raducanu moving out wide on the forehand side. I noticed she was sliding after hitting the shot. A pair behind us were discussing Raducanu and how she’d gone from having fun and being smiley at the US Open to looking serious and tense. She certainly wasn’t happy here as the first set was decided on the tiebreak which Noskova won with a flurry of winners. Three clean winners in a row followed by a Raducanu forced error on set point. I didn’t realise at the time how many winners Noskova was hitting. Raducanu referenced in her post-match interview how Noskova was killing her when she dropped her ball short. Noskova ended the match with 48 winners!

I went out for a comfort break early on in the second set and honestly thought I might miss the end of the match. While I was away, Raducanu broke back and then was forced to come from a break down for the second time to level up at 4-4 in the second set. I’ve watched a lot of Raducanu matches in 2022 and I didn’t think she was playing that well. This was a different type of match for Raducanu to many she’s played in the year as she was mostly on the back foot and had to battle from behind. I thought she did really well to stay with Noskova who was shooting winners down-the-line at will.

The end of the second set was fantastic. It’s a bit of a blur to be honest! I want to watch it back again. I noticed portions of the crowd suddenly started cheering for Linda. My theory was they wanted the match over in straight sets as Benoit Paire was up next on the court. There were several “Allez Benoit” shouts too 🙄. There were also a couple of shouts of “come on you Spurs”. No reaction from Emma!

Raducanu won the second set and was hitting so much better at the start of the third set. Raducanu broke Noskova’s serve, did face break points at *3-1, but Noskova missed an opening down-the-line on break point. After Raducanu held, Noskova’s challenge faded very quickly. Raducanu went onto win her first match at French Open. Raducanu was absolutely beaming at the end and ran over to a fan in the front row who had been cheering for her. I wonder if she knew the guy? I remember this guy shouted earlier in the match – “break her now, Emma”. What a genius. He should coach all the players 😂. That comment just made me laugh.

UPDATE – After listening to the Tennis Podcast, I realised the guy had been at all of Emma’s matches in New York. Nice story!

Raducanu clapped Noskova off court and was clearly impressed by her performance. Noskova is now certainly on my radar. So much to like about her game. I was impressed by how calm and level-headed she was. I can’t believe she is only 17 years old! Looks much older than 17.

I’m so happy to have watched Raducanu on Court Simonne-Mathieu and to win from a set down! One of those dreamy tennis memories that will stay with me for a long time.

We stayed on court for the final match on the schedule featuring Benoit Paire. The atmosphere suddenly changed and it felt like a football match. Ivashka was booed walking onto court 😂. Every shot from Paire in the warm-up was greeted with a cheer. On the first point of the match, Paire hit a superb return that set up the point for a winner and some of the crowd were already on their feet. It was exciting to actually be on one of these courts with an electric atmosphere which I normally hear when i’m wandering grounds at Slams.

I only stuck it out for three games – it was fun for a time but soon became irritating 😂. I just can’t get excited for Paire. He’s a clown. I ended up wandering over to court 13 to see some of Rybakina-Rus before the evening rain arrived.

My bro and work pal stayed for the set and reported that there was one moment where Ivashka paused to tie his shoes and got booed. Paire stirred up the situation by complaining to the umpire 😂. Glad that Ivaskha won the match when it resumed on Tuesday.

The bro and I are always in competition to rack up as many FPAs (famous person alert). We didn’t spend so much time around the grounds on Monday so less FPAs than usual. My favourite spot was another umpire one. Carlos Ramos and Louise Engzell were having a good old chat outside Court Philippe-Chatrier. We had a wander and when we returned they were still there nattering away!

Monday’s moan was for a large-headed person with big hair in front of us on Court Simonne-Mathieu 😂😂😂. Annoyingly, they seemed to be enjoying the tennis and didn’t leave the stadium while we there. They also whipped out their umbrella during the drizzle and were one of the last people to put it away 🙄.

My quest is always to see and photograph players for the first time! Raducanu was top of my list so was chuffed to see her live and get lucky with both the schedule and the weather. Caught a few points of at Rybakina at the end of the day which was another solid tick.

Snap of the day 📸

Love this shot of a beaming Raducanu! 😁 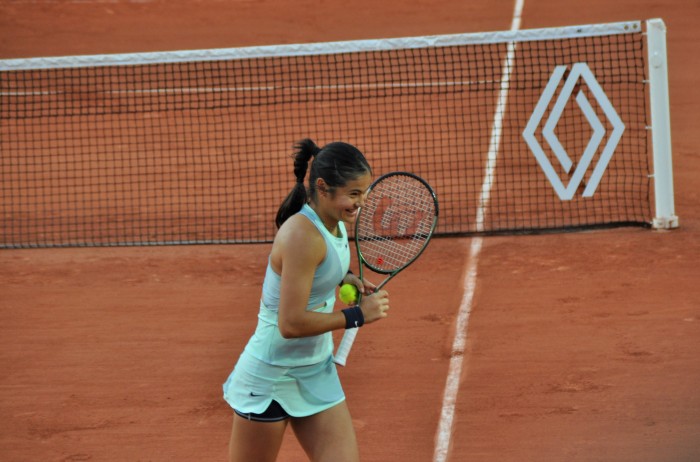 An album of photos from day 2 at Roland Garros can be found on the MTB Facebook page.