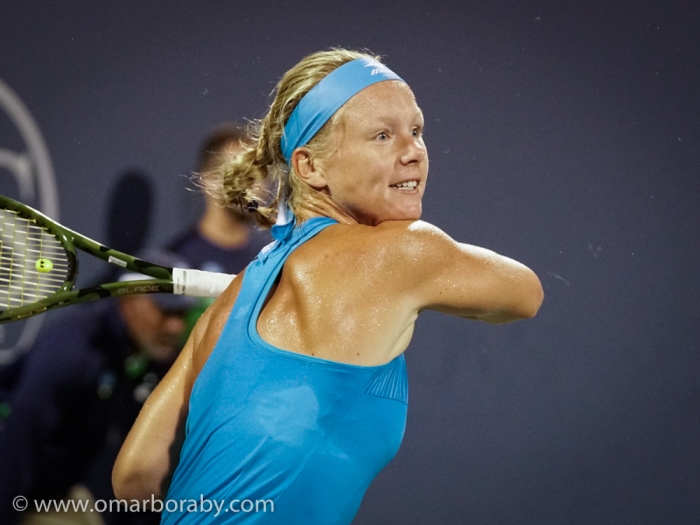 Kiki Bertens saved a Championship Point to win her biggest career title, beating the world number one, Simona Halep, 2-6 7-6(6) 6-2 in Sunday’s Cincy final. For the second match in a row, Bertens rallied from a set down to secure her sixth (!) top ten win of the last two weeks. The dust is still settling on this rather wacky final so here are some quick thoughts on what happened…

Halep fast out of the blocks

For a set and a half, Simona Halep looked to be almost cruising. Serving at 92% of first serves in (!) and increasingly dictating the rallies, the confidence was overriding the fatigue. It was wonderful to see Halep being so aggressive, particularly on the forehand side where she was going down-the-line with intent. Halep’s depth also kept Bertens back and unable to unleash with her own forehand.

Halep saved a break point to serve out the first set, 6-2 in just over half an hour.

Bertens’s resilience and Championship point save

Bertens demonstrated her resilience to gain a foothold in the match. Despite losing the early break of the second set, Bertens stayed in the present to get to the second set tiebreak. After a string of loose errors, Halep produced her lone Championship Point at 6-5 on the Bertens serve in the second set tiebreak. Absolute props to Bertens on this one. A fan shouted out “Haide, Simona” in between Bertens’s first and second serve. Bertens showed character to land the second serve in play and then go after her forehand. On the final two points of the set, Halep looked a little tight as she lost the depth on her groundstokes and twice went into the net.

All the tennis over the past two weeks seemed to catch up with Halep in that third set. The depth continued to go away in the third set, along with her patience. There was a changeover chat with coach where she seemed to be dwelling on her missed opportunity and said she had no positivity left. All the credit to Bertens who remained very composed and focused on her own game. Bertens continued to take more chances on return and could rely on her serve, dropping just nine points behind it in the third set.

Halep showed signs of fight at the end. Bertens held her ground and served it out with an ace!

It is Bertens’ first-ever victory over a World No. 1 and her first hardcourt title! pic.twitter.com/6ml1jh7tmr

Rally of the match

Halep won the point of the match at 4-4 30-30 on the Bertens serve in the second set. This felt like it could be the pivotal point of the match as it gave Halep a break point that had she taken, would have seen her serving for the title. Bertens once again showed her resilience and ability to reset to hold that game. To be honest, it was a real surprise as Bertens looked exhausted after that long rally.

Simona Halep won a point in the third set where she hit a successful tweener. I was screaming 😂.

You need to watch this INCREDIBLE point!@Simona_Halep busts out the 'tweener in a fantastic rally! #CincyTennis pic.twitter.com/2sQ9aWDsAt

Tennis is a funny sport. Halep was one point away from doing the Montreal-Cincy double but ends the week as Cincy runner-up for the third time in her career and on the back of a tough loss. I really hope that Halep doesn’t dwell on this final because what she has achieved over the last two weeks has been truly exceptional. I’m very intrigued to see whether Halep will play New Haven next week.

I wrote in the week about Bertens being a contender for the most improved player of 2018 and I think this week lifts her even higher in that argument. Bertens is having a tremendous year. I’d always wondered why Bertens has never been able to transform her game from clay to the hard court because her aggressive baseline game would seem to suit hard. Bertens has backed up her Wimbledon quarter-final and broken through on hard in a big way this week, and to a degree last week in Montreal too, with a bundle of top ten wins. I’ve always thought Bertens is a massive confidence player and right now she seems to have total belief in herself and her game.

Singapore and the top ten are suddenly in sight. To see those happy tears at the end upon winning was a wonderful moment. Congrats, Kiki!