It’s my favourite time of the year as the start of the 2018 Wimbledon Championships is drawing closer! The draw was announced on Friday morning and we know that the bottom half will kick things off on Monday. This preview showcases my three favourite first round matches set for Monday. I’ll be off work Monday to Wednesday (at the tennis on Wednesday) so hope to be very active on the blog, at least for the start of the tournament! 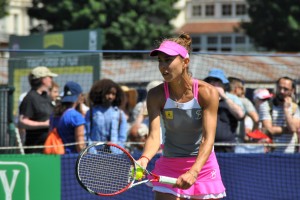 My favourite match from the slate of first rounders features two players who have lit up the grass court season so far. The number 29 seed, Mihaela Buzarnescu will take on the Eastbourne finalist, Aryna Sabalenka in what should be a really cracking clash. Buzarnescu has to be the front runner for most improved player in 2018. After reaching the last 16 of the French Open including a fabulous win over Elina Svitolina, Buzarnescu has continued to impress on the grass with seven match wins, her most recent in Eastbourne from 3-6 2-5 down against Kiki Bertens. A shoulder injury seemed to hinder her against Ostapenko in the third round, which was understandable based on the sheer volume of tennis she has played in recent months. Still, confidence seems to be high and that forehand is such a weapon.

Sabalenka had a breakthrough week in Eastbourne where she reached her first Premier final, losing out to Caroline Wozniacki in two tight sets. It was a great showing from Sabalenka in her highest profile match to date, just coming up short at the ends of both sets where she was unable take advantage of her opportunities (perhaps, a lack of experience in finals?). All of Sabalenka’s matches up to the final went the distance and she scored a first top ten win over Karolina Pliskova in the quarter-finals. Sabalenka’s aggressive game seems to suit the grass well and she’s thrived out on Centre Court, managing to raise her level for the big stage.

Both players are likely to be fatigued with Buzarnescu contesting the doubles final with partner, Irina-Camelia Begu on Saturday. The pair have played twice before with Sabalenka winning both encounters and prevailing, 5-7 6-3 6-2 in their most recent encounter in a rain-soaked Lugano on clay back in April. Every year there is always one first round match at Wimbledon where I just cannot make my mind up and this is it! After much deliberation (😂), I am going to go for Sabalenka…

Sloane Stephens faces a tricky opener in her first competitive match on grass this year against Donna Vekic. While Stephens opted not to play any grass court warm-up events, Vekic played the trio of Nottingham, Birmingham and Eastbourne where she scored four singles wins along the way. Vekic reached the second round of Eastbourne where she was defeated by Barbora Strycova in straight sets.

This is clearly a tough opener for Stephens although she’s increasingly shown an ability to get up for the big tournaments. I’m still a tad wary after all the tennis she played at the French Open and am wondering whether there could be a hangover from losing the final from a set and a break up against Simona Halep.

In her last competitive match against Strycova, Vekic was quite erratic and struggled to make a consistent impact against Strycova. I wonder if this could be a similar story against Stephens who was supremely solid in Paris and has been during many of the recent big tournaments. A challenging opener, but i’m going for Stephens.

In an intriguing unseeded first round clash, Ekaterina Makarova will take on Petra Martic on Monday. Makarova, who has had some superb results on the grass in the past, has struggled for form in 2018 with losses in her first round matches in Birmingham and Eastbourne. Granted, they were against decent opponents in Alizé Cornet and Dominika Cibulkova. Martic had a good win over CoCo Vandeweghe in the first round of Birmingham before getting overpowered by Buzarnescu in the next round. Martic lost in the first round of the ITF $100k event in Southsea to Magda Linette where she had served for a straight sets win.

Both have had some tough losses during the grass court season but are equally competent on this surface. Makarova has had a challenging year and has yet to win back-to-back singles matches on the tour in 2018. Martic has had more highlights this season in singles. However, since reaching the quarter-finals of Indian Wells, Martic hasn’t won back-to-back singles matches. Martic has done great at the Slams. This looks to be her trickiest draw at a Slam for some time…

I’ve picked Makarova to win in her last two matches so could it be a case of third time lucky?! Actually, i’m favouring Martic and her wonderfully fluid game to prevail.