The draw for the 2018 French Open was unveiled on Thursday night. This post previews three of my favourite matches from the 64 first round matches which will be played over Sunday, Monday and Tuesday. I’d hoped to do a post of ten matches but just ran out time and want to do a draw tonight! I’ll put up some match thoughts once the schedules for each day is finalised.  I’m off on holiday to Portugal on Saturday but am still hoping to watch some of the tennis and get one post up a day. We’ll see how that goes… 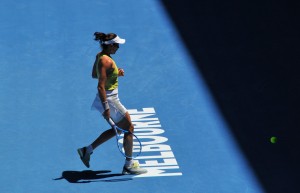 My favourite match-up from the first round will be a battle of former French Open champions as the 2016 champ, Garbiñe Muguruza takes on the 2009 champ, Svetlana Kuznetsova. When they last met this was an all top ten clash back in Cincinnati last year where Muguruza prevailed, 6-2 5-7 7-5 in a high quality affair. Kuznetsova’s ranking has dropped to 42, her lowest ranking in over five years, after spending five months on the sidelines following wrist surgery.

Neither has been in great form on the clay despite this arguably being their best surfaces. Kuznetsova played a standard clay court season but has still been finding her way back, posting a 3-4 W-L record. Muguruza’s year has generally been mediocre by her high standards. The Spaniard has lost a string of matches from convincing positions with her most recent match being a tough loss to Daria Gavrilova in Rome from match point up in an encounter that finished at 2am local time.

I thought Kuznetsova had a decent record against Muguruza but upon checking, I realised I was misinformed! Muguruza has won their last five meetings on tour. Despite her recent poor form, i’d be more inclined to pick Muguruza. The Spaniard has a habit of getting her game together for the Slams and especially at the French Open where she holds a superb 19-4 W-L record. 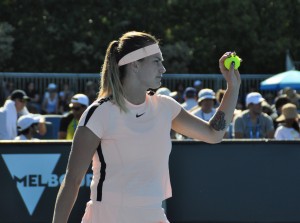 The number 18 seed, Kiki Bertens faces a tricky opener in Paris against Aryna Sabalenka. The Dutch player has proven herself to be one of the best on clay over the last few years and has reached two finals this year in Charleston and Madrid, winning the former for her biggest title to date. Sabalenka is a player I seek out in draws and on the schedule. She’s a love/hate character with her piercing grunts, yet powerful and positive game. Recent form hasn’t been so strong. Sabalenka has proven herself on clay this year with a run to the final in the rain-soaked Lugano.

The pair have played just once before in Fed Cup action last year where Bertens won, 3-6 7-6(6) 6-4. I think the fact that Bertens has played Sabalenka before is important as I would guess that the Belarusian player is someone that takes some adjustment to playing as she comes out ultra aggressive. Bertens lost in the quarter-finals of Nurnberg on Friday to Kirsten Flipkens. While a surprising loss, it may have been a blessing in disguise to give her a few days to fine tune preparations for Roland Garros. I’ll go for Kiki to battle through in three.

It’s a surprise that Julia Goerges and Dominika Cibulkova have played just once before and that was nearly seven years ago! Back in 2011, Goerges was the higher ranked player and she’s also the seed here. In between these two meetings, Cibulkova has been the more successful player on tour. The Slovak player has generally been on the decline as she struggled to back up her WTA Finals triumph at the end of 2016. More recently, she was sidelined with illness during the Spring.

Cibulkova seems to be rounding into form at the right time with a final showing in Strasbourg. Cibulkova battled back against Mihaela Buzarnescu in the semi-finals, 2-6 7-6(5) 6-1 – a classic gritty Domi win and something we haven’t really seen much of this year. Goerges started the season in fabulous form, picking up from her 2017 end. Injury and illness have since halted the German player who was forced to skip Rome and then lost in the first round of Nurnberg to Kristyna Pliskova in three tight sets.

The only previous meeting doesn’t hold much weight here considering it was so long ago and on grass. Cibulkova is clearly brimming with confidence and she’s always a dangerous player going into a match as the underdog. It will be interesting to see how Cibulkova fares in Saturday’s final in Strasbourg against Anastasia Pavlyuchenkova. Goerges will do well to advance past this first round hurdle…

22 thoughts on “French Open 2018, 1st Round Preview: Muguruza vs. Kuznetsova, Bertens vs. Sabalenka”