Tuesday’s schedule at Indian Wells is always a cracker with all eight WTA fourth round matches played on the same day. It makes trying to write about the prospective matches a challenge so i’ve only been able to address five of them before bed! For a recap of action on day 5 at Indian Wells, check out Sunday’s Set Points HERE. 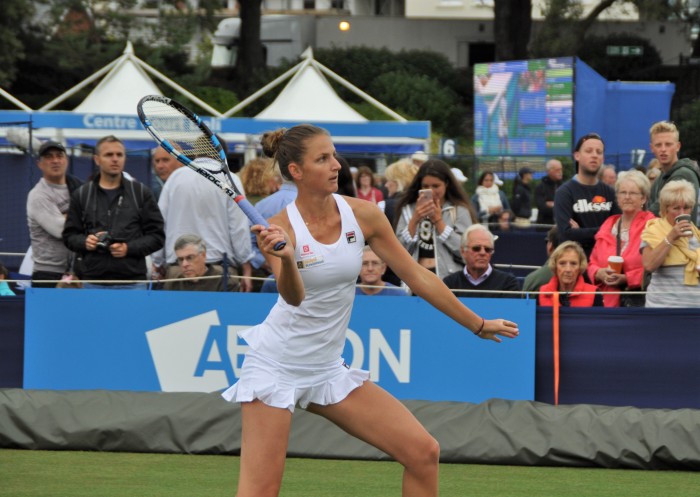 Simona Halep vs. Wang Qiang – Wang continued her bizarre dominance over Kristina Mladenovic in the third round but will face the ultimate challenge against Halep. The Romanian player had to work exceptionally hard to get past the 19-year-old, Caroline Dolehide on Sunday, 1-6 7-6(3) 6-2. The win will no doubt make her stronger and she doesn’t seem to be feeling her foot which is great news. I’m going for Halep in straights – I don’t see Wang having the patience to outlast Halep on these courts.

Karolina Pliskova vs. Amanda Anisimova – The teens have been a revelation at this tournament and Anisimova has been the most impressive of the lot. She’ll go for a second top ten win on Tuesday against Pliskova after beating Petra Kvitova in straights on Sunday. Pliskova has not hit top form yet, but continues to chalk up solid wins and got past Zhang Shuai in three sets in the third round. On form, Anisimova can totally win this. Factor in experience and occasion, and I think Pliskova might just have the edge. The Czech player has the reliable serve and is a cool customer who has shown plenty of battling qualities over the past year. I’m fascinated to see if Anisimova can go deeper in this draw.

Petra Martic vs. Marketa Vondrousova – Hipster match alert. Martic continues to deliver at the big events and knocked out Jelena Ostapenko on Sunday for her first top ten win since 2012! Like Martic, Vondrousova hasn’t dropped a set through three rounds. The Czech player made a name for herself on the ITF tour in 2017 and is beginning to translate that form to the WTA tour. Her forehand has looked mega this week. The pair have already played this year with Martic winning in two tight sets in the first week of the year in Auckland, 7-6(2) 6-3. I don’t have any strong opinions about the winner of this one. If I had to make a pick, i’d probably go for Martic.

Naomi Osaka vs. Maria Sakkari – Another all unseeded match-up but it’s not totally out there in terms of surprise. Sakkari had won just four matches on tour since a breakthrough run in Wuhan last year where she reached the semi-finals. Osaka has found the balance between power and consistency well this week with wins over Maria Sharapova, Agnieszka Radwanska and Sachia Vickery, and seems to be building form after a stop-start 2017 season. The pair have never played each other before on the WTA tour. I’m going for Osaka but I have to admit that I have not seen Sakkari play this week so it’s only based on what i’ve seen! Osaka has looked great…

Angelique Kerber vs. Caroline Garcia – Kerber and Garcia both gained revenge in third round wins on Monday. Kerber beat the defending champ, Elena Vesnina who had defeated her on the same court during her stunning run last year. Kerber’s level was up and down, yet she stayed mentally tough in the crux moments, winning 7-5 6-2. Garcia snapped a five match losing streak with a first ever win over Daria Gavrilova. The Frenchwoman generally got did well at dealing with Gavrilova’s loopy topspin shots and was ultimately rewarded for being the more positive of the pair. Garcia beat Kerber in their most recent encounter in Wuhan last year, 3-6 6-3 6-1. I like Garcia’s consistency this year but I think she’ll need to up her level quite significantly to take out Kerber. I’m going for Kerber in 3.

6 thoughts on “WTA Indian Wells, 4th Round Previews: Pliskova vs. Anisimova, Kerber vs. Garcia and more”