Following on from the dissection of 2017 predictions on Moo’s Tennis Blog, here are the 2018 predictions. Every year is difficult to whittle it down to a top ten and this year was no different. The top 10 is followed by the “ones to watch” with a selection of players that i’ll be following with interest in 2018. As always, i’d love to hear all your predictions for the new year!

10. Madison Keys: I’d have Keys much higher but I still remain a little vigilant about the wrist. Keys’s run to the US Open final was superb and I think she is beginning to harness her power game. The partnership with Lindsay Davenport is a gorgeous match.

9. Maria Sharapova: The prospect of S.Williams, Sharapova and Azarenka all playing at the same time could be a fascinating plotline in 2018. While I think all three fully fit and playing regularly would crack the top ten again, the only one i’ve gone for in my list is Sharapova. Despite injuries in 2017, I actually thought Sharapova’s level was decent and she seemed highly motivated as ever. If she can stay healthy, I think that Sharapova will sneak back into the world’s top ten again with at least one deep run at a Slam.

8. Angelique Kerber: In hindsight, backing up the magnificent 2016 season was always going to be damn tough for Kerber. I like the fact that she has changed coach, to Wim Fissette, in what will be the start of a new chapter in her career. Currently ranked at number 21 in the rankings, I think that Kerber will thrive out of the spotlight and with a point to prove to get back into the world’s top ten.

7. Petra Kvitova: As the dust settles on a dramatic and emotional 2017 season, i’m just thrilled that Kvitova is playing tennis again. Even with playing half a year and with such uncertainty, Kvitova landed a top 30 finish in 2017. Now she has made the comeback to the tour, I think Kvitova will be able to focus more on her tennis and get back to where she belongs in the rankings. Even with her hand still not at 100%, there were flashes of pure brilliance in 2017.

6. Ashleigh Barty: Readers of this blog will know that i’m very fond of Barty. In my opinion, she has it all – serve, forehand, variety and a general understanding of the game. Barty has a great attitude and is one of the coolest customers on the WTA tour. Backing up a breakthrough season is never easy, yet Barty will get a headstart considering she was forced to go through qualifying for big events as recently as in August.

5. Karolina Pliskova: After cementing herself as a top five stalwart in 2017, i’d be surprised to see Pliskova tumble. The serve alone should keep her in the top ten and she will always be up there in the list of contenders for a Slam. I’d love to see her team up with Rennae Stubbs again.

4. Caroline Wozniacki: Staying healthy was the key factor for Wozniacki’s stunning 2017 season, as well as notable improvements in her game such as the serve and the forehand. I still remain a tad skeptical as to whether Wozniacki can string together seven match wins and triumph at a Slam. The Dane would likely have to get past an in-form big hitter and on a quick surface, compared to Singapore where she recently triumphed.

3. Simona Halep: There’s no doubt in my mind that, barring any serious injuries, Halep will end the year in the world’s top five. From Miami, her consistency on the WTA tour in 2017 was sensational. Whether she can win that first Slam is something i’m on the fence with. The way she reacted to the near-misses of reaching world number one with her run in Beijing was definitely encouraging.

2. Garbiñe Muguruza: I’ve been yoyoing on Muguruza for the past few years but i’m currently high on the Spaniard. I was super impressed with the consistency she brought to her game in 2017, coupled with an aggressive edge that came to the fore at Wimbledon. When she’s in that kind of form, feeling confident coming forward and clutch on big points, I don’t think there are many players who can rival Muguruza. Definitely more Slams on the horizon…

1. Elina Svitolina: I’ve really changed my opinion on Svitolina having seen her as a top 20 player in the past. The growing intent to become more aggressive was clear to see during many of her matches in 2017 and I admire her resilience on court. The next big obstacle is translating her form at the Premier events to the Slams. She came close to the big Slam breakthrough in 2017 but just came up short on a few occasions. Svitolina has improved her season-end ranking every single year she has been on the tour and I think she will do it again in 2018. Top of my list of newbies to win a first Slam.

Anastasia Pavlyuchenkova: Always been a fan of Pavlyuchenkova’s game and I firmly believe that she is one of the cleanest ball strikers of the game. Pavs is currently at her best ranking for over six years and she did this with just one win at the last three Slams of 2017. I’ll never lose hope that she will be able to put it all together on a consistent basis and improve her focus in matches. A top 12 finish.

Daria Kasatkina: While not a straightforward year for Kasatkina, she still managed to improve her ranking in 2017. I think there is a long way to go for Kasatkina in terms of finding the balance between defence and attack, but I do think she’s going to be a regulation top ten, top five player in years to come. A top 15 finish.

CiCi Bellis: A rough end to the year but Bellis showed plenty of promise during 2017 and hit a career high ranking of 36 in August. For me, her mentality on court is one of the best i’ve seen from all of the up-and-coming players. I’d expect her to push on up into the world’s top 20 in 2018 and reach her first Slam quarter-final.

Belinda Bencic: You all know i’m big on Bencic and her recent run of form has not surprised me in the slightest – never write off BB! Bencic closed the season on a 15 match winning streak. All I see from Bencic is her going up, up and up. If she stays healthy, I don’t see why Bencic can’t be knocking on the door of the world’s top 25, perhaps higher.

Elise Mertens: Very impressed with Mertens during 2017 who enjoyed one of the most consistent seasons on tour, spearheaded by a strong start and finish. I really like her attitude and temperament, and she is still going under the radar for me. A top 25 finish.

Natalia Vikhlyantseva: I was super impressed by Vikhlyantseva in her last outing of the year in Moscow where she served sensationally well. A concern in her game is coming forward to the net, but those groundstrokes are lethal. A top 30 finish.

Aryna Sabalenka: One of the most exciting personalities on the tour. Sabalenka made a big splash at the end of the season with a final showing in Tianjin (such a fab final vs. Sharapova), Fed Cup exploits and her biggest title in Mumbai. One to watch in 2018 and I think she’ll be a seed for the final Slam of the year in 2018. A top 30 finish.

Kayla Day: Love Day’s game, it may take some time to adjust to the power on tour but high hopes for the future. A top 75 finish.

Amanda Anisimova: Just 16 but so much talent. Perhaps one year off her big breakthrough although I wouldn’t put it past Anisimova cracking the world’s top 100 in 2018.

Anastasia Potapova: All aboard for Potapova to be a thing in 2018. Like Anisimova, may be a year too early. Top 100 in sight. 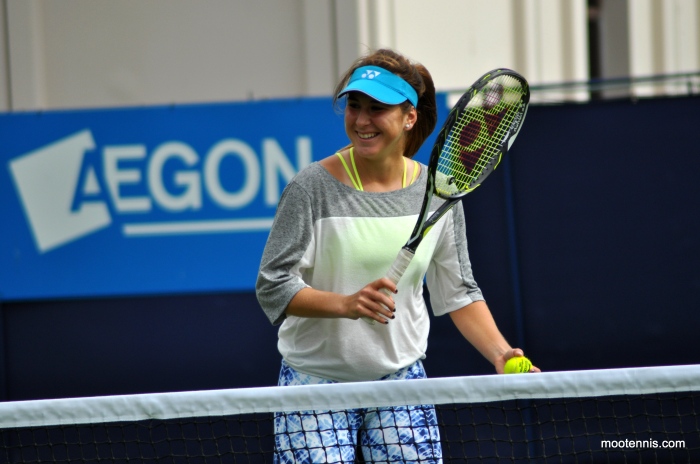