This post features a duo of snap previews for day 3 of main draw action at the Western & Southern Open in Cincy including Dominika Cibulkova vs. Alizé Cornet and Daria Gavrilova vs. Camila Giorgi. For a recap of action of day 1 in Cincy, check out Monday’s Set Points HERE and for a full match review of the first rounder between Petra Kvitova and Anett Kontaveit, click HERE. 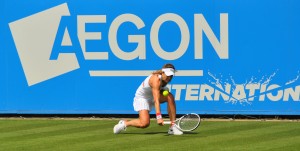 Dominika Cibulkova and Alizé Cornet both avenged recent losses to their first round opponents in Cincy to battle through to the second round and set up a tenth encounter on tour for Wednesday in Cincy.

Cibulkova lost to Ana Konjuh in the third round of Wimbledon in an eventful three setter, 6-7(3) 6-3 4-6. The pair played out another lengthy encounter in Cincy and this time it was Cibulkova who prevailed for a hard fought, 5-7 7-5 6-2 victory. Konjuh had break points at 4-4 and 5-5 in the second set that, if she had converted, would have seen her serve for the match. Missed returns and a rapidly rising unforced error count saw Konjuh’s challenge fade as Cibulkova broke through to win the second set and then rather ease through the decider. Cibulkova grew in confidence and was able to get Konjuh on the move and out of her hitting zone in the third set.

Cornet lost to CiCi Bellis in rather convincing fashion two weeks ago in Stanford, 3-6 2-6. The Frenchwoman hadn’t won a match since Roland Garros – on Tuesday, she snapped a six match losing streak with a surprisingly brilliant display to overcome Bellis, 7-6(5) 3-6 6-2. Relying on terrific defence, crafty drop shots and flashy winners, the Frenchwoman wore down her in-form opponent and was just too solid in the decider. After missing two break points at 1-1 in the decider, Bellis ran out of steam as she increasingly sprayed forehands and failed to put returns back into court.

Cibulkova leads Cornet, 6-3 in their head-to-head, but Cornet has won three of their last four encounters including a win in the first week of the year down under in Brisbane. The win against Konjuh will have been a huge confidence boost for Cibulkova. The issue this year has been backing up the wins and building momentum – she has won back-to-back matches at just one of her last eight tournaments. The serve, while holding up well against a very erratic, Konjuh, looks to be an issue with plenty of strapping on the shoulder. If Cornet can build on her fabulous showing against Bellis, and it’s a big if because the Frenchwoman hasn’t had the most consistent year, then i’d fancy her to have a good shot at the “upset”. 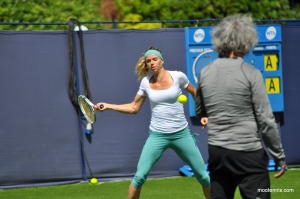 A classic contrast in styles awaits in an all unseeded second rounder between Daria Gavrilova and Camila Giorgi. I was courtside for their only previous match a few years ago in Eastbourne in one of the most entertaining matches i’ve watched live. Gavrilova scrapped for her life and saved match points to win, 3-6 7-6(6) 6-3. Gavrilova had been outclassed and outhit for a set and a half, but her sheer determination and willingness to chase after every ball won her the match. Gavrilova even mentioned the match earlier this year in an interview for Sport360 as one of her highlights on grass.

Both players won their first round matches in Cincy in straight sets – Giorgi enjoyed her third straight sets win of the week (having coming through qualifying) with a 6-2 6-2 win over Katerina Siniakova. Giorgi broke Siniakova’s serve seven out of eight times! Gavrilova was unable to serve out the match against Kristina Mladenovic, leading 6-0 *5-4, but just about held on for the win in straight sets, saving a set point in a tense second set tiebreak. Nerves creeped in on Gavrilova’s serve towards the end, but her ability to run around onto her potent forehand and hit decent passing shots with Mladenovic up at the net were key factors in the win, as well as accepting some gifts from her opponent.

Interestingly, both Gavrilova and Giorgi have won 24 matches in 2017 so it’s tough to split them apart! Giorgi’s got the power, while Gavrilova has the ability to absorb pace, scrap from the baseline and hit her targets. I’ve seen both wobble in a leading position so i’d expect this one to go the distance. I’ll take a risk and go with Giorgi, who has been in fine form so far this week. The courts may just reward her positivity going forward.