This post features snap previews for the two women’s quarter-finals scheduled for No.1 Court on Tuesday at Wimbledon – Garbiñe Muguruza vs. Svetlana Kuznetsova up first at 13:00pm, followed by CoCo Vandeweghe vs. Magdalena Rybarikova. For a full match preview of the first match up on Centre Court between Venus Williams and Jelena Ostapenko, click HERE.

1. Svetlana Kuznetsova vs. Garbiñe Muguruza (1st up on No.1 Court) 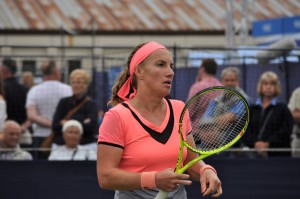 Two players who were not necessarily being discussed as title contenders before Wimbledon, Svetlana Kuznetsova and Garbiñe Muguruza, are now well in the mix after both playing their way into form and producing superb displays on Manic Monday.

Kuznetsova hit 37 winners (!) to just 20 unforced errors in a 6-2 6-4 win over Agnieszka Radwanska. There were several moments in the second set where this match could have gone away from Kuznetsova – Radwanska saved four break points in an eight deuce game to stay in front on serve at 2-1 and then Kuznetsova faced break points when serving for the match. The Russian player came through in flying colours for her 14th win over Radwanska. Kuznetsova held serve in all nine of her service games!

Muguruza played a fantastic match to come from a set down and beat the world number one, Angelique Kerber, 4-6 6-4 6-4. Kerber played the best set of her year to take the opener, picking off Muguruza at the net. Not only was she rock solid from the baseline, Kerber also looked to take the ball down-the-line, throw in some slices and go for her shots with more conviction than she had done at any point during 2017.

Muguruza’s tactics weren’t working as she seemed to lose confidence up at the net and became very careful with her volleys. However, she improved as the second set wore on and looked increasingly menacing on the backhand side. Saving a break point at *1-1 and *2-2 to stay ahead on serve, Muguruza eventually carved out her first break of the Kerber serve to win the set, 6-4.

This was a magnificent contest with some of the best tennis of the match coming in the third set. Muguruza twice recovered from a break down and then saved four break points in the game of the match at 3-3 – down break point, Muguruza hit two volley winners and saved two more with aggressive hitting. This proved to be the crucial game as Muguruza would go onto break for the win. The Spaniard won 50% of net points in the first set, but improved to 74% in the third set. Persistence paid off for Muguruza.

Kuznetsova and Muguruza played the first all-top ten clash of 2017 back in Brisbane. Muguruza has won their last three matches on tour, two in straight sets, yet this will be their first encounter on grass. Both are playing great this week and I think it’s a close one to call. I’m rather sold on Muguruza with the way she’s playing this tournament – highly intense, serving well and moving forward to the net, and finding an excellent balance between defence and attack. I think the win over Kerber was a huge mental effort and will prepare her well for another tricky match.

2. CoCo Vandeweghe vs. Magdalena Rybarikova (2nd up on No.1 Court) 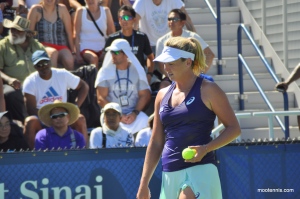 Two of the best grass courters, CoCo Vandeweghe and Magdalena Rybarikova, will meet in the second quarter-final on No.1 Court. While Vandeweghe seeks her second Slam semi-final of the year, Rybarikova is in uncharted territory having never previously advanced past the third round of any Slam.

Vandeweghe is still yet to drop a set this week and produced another terrific display on Monday, condemning Caroline Wozniacki to a 0-6 record in 4th round matches at Wimbledon. Vandeweghe won, 7-6(4) 6-4 in one hour and 37 minutes. The American player won the tiebreak with her decisive net play, moving forward at the right time and dispatching three gorgeous volleys. The second set went entirely with serve until Wozniacki’s service game at *4-5 where Vandeweghe pounced. This was Vandeweghe’s first ever win over Wozniacki and she’s into the quarter-finals of Wimbledon for the second time in her career.

Rybarikova took out the qualifier, Petra Martic in three sets, 6-4 2-6 6-3. Rybarikova came from a break down in the first set, sealing it with a nice passing shot winner. Breaking at 4-2 in the third set and then saving break points to consolidate, a better-serving Rybarikova served out the biggest win of her career to move into the last eight of Wimbledon.

Interestingly, Rybarikova leads Vandeweghe, 2-0 in their head-to-head, and won easily at Roland Garros just last month, 6-1 6-4, in the first round. Rybarikova also won on grass in Birmingham in 2011, 6-2 6-1. Prior to the last 16 matches, I had Rybarikova making semi-finals. However, after watching Vandeweghe’s match today i’m leaning more towards the American who has looked in stunning form.

The head-to-head is a concern for Vandeweghe, but her serve is such a huge weapon on this surface and she’s backing it up with some very competent net play. I’d also be a little concerned about how Rybarikova would deal with the situation if she got into a winning position with Vandeweghe having the greater experience at this stage of a Slam.