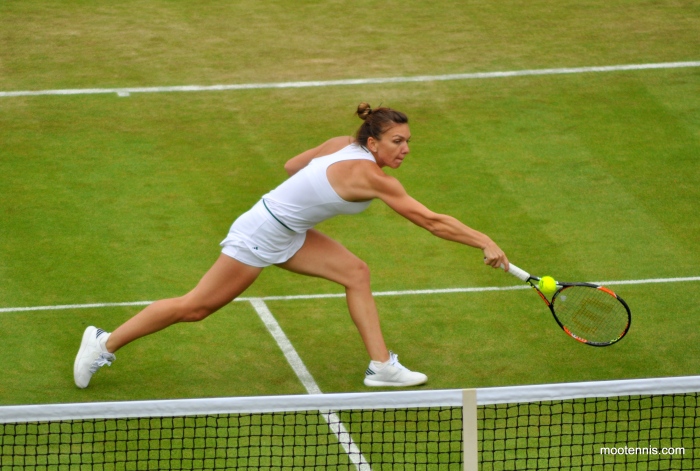 The final of the 2017 Mutua Madrid Open will be contested between the number three seed, Simona Halep and the number 14 seed, Kristina Mladenovic at not before 7pm local time on Saturday. While Halep will play a record third Madrid final, Mladenovic is into a first ever Premier Mandatory final.

Halep went into her semi-final as the heavy favourite and handled the pressure well, fighting through a tougher-than-the-scoreline-suggested encounter to beat Anastasija Sevastova in straight sets. Sevastova produced some neat nuggets of variety in the first set, but couldn’t live with Halep’s subtle aggression and sustained consistency from the baseline. Halep was timing the ball beautifully and hitting the forehand especially well.

Channeling more variety in the second set and drawing Halep into the net with drop shots, the Latvian player pounced to go up 3-0 in the second set. Halep had her coach, Darren Cahill on at the next changeover and it worked out positively – the Romanian player was much more proactive and dynamic, and with increased focus on the forehand, secured the virtual bagel to win in 73 minutes.

The second set was a tricky one for Halep but she was clutch in a series of tight games – Halep saved break points at *2-3 and *4-3 and broke Sevastova’s serve twice in games that went to deuce. The relief was clear to see at the end for Halep.

What a year… Mladenovic is having a banner season and has reached her first Premier Mandatory final after edging Svetlana Kuznetsova in two tight sets. It was a high quality match for the most part with Mladenovic playing the big points better.

After an early exchange of breaks, the first set went with serve as Mladenovic enjoyed mixed success with her drop shots. The Frenchwoman stole the all important break at 4-4 with Kuznetsova going wide on the forehand. Mladenovic served out the opener to 30 – serving out sets has always been a nerve-wracking moment for the Frenchwoman but as she continues to rack up the wins, it is clear that the belief is rising.

There were a handful of key moments late on in the second set – Mladenovic missed three break points at 4-4 *0-40 on Kuznetsova’s serve, while the Russian player was unable to capitalise on two 30-30 openings on Mladenovic’s serve. The set eventually ran into a tiebreak where Mladenovic’s fabulous forehand and errors from Kuznetsova, notably a botched overhead, proved to be the difference. Mladenovic did a superb job at drawing the short ball from Kuznetsova with a big first serve and then moving effectively to hit a winner off the forehand.

Head-to-head record: Mladenovic leads Halep in the head-to-head, 3-1 and won their last encounter in Indian Wells earlier this year, 6-3 6-3. I wouldn’t read too much into that particular encounter as Halep was coming back from injury and actually competed better than the scoreline suggested. The pair have never played before on clay.

Interesting stat(s): Halep has had a superb week all round, reaching the semi-finals of doubles with her partner, Irina-Camelia Begu including a great win over Sania Mirza and Yaroslava Shvedova in the quarters. For Mladenovic, she is projected to crack the world’s top 15 in a new career best ranking next week. Even more impressively (and shockingly!), she could rise to number one in the Race to Singapore if she wins Madrid! On a negative note, Mladenovic has won only one of her six finals on the tour.

Here are a few of my favorites pictures of Simona & Irina by @tennis_shots. ❤️ pic.twitter.com/NIRl0JDIgD

Final thoughts: I am torn, torn, TORN with this match-up… I can see both having a glory moment! For Mladenovic, she won her first WTA title in St. Petersburg earlier this year but generally, has still been coming up short in finals having lost out in Acapulco and Stuttgart in 2017. She has been knocking on the door though for a big title and it almost feels like the time is nigh as she has found that winning formula.

Confidence can be huge and the way that Mladenovic is managing to serve out sets and wins is an ode to where her mindset is at the moment. The serve and forehand have been fantastic for large stretches of 2017. One concern for Mladenovic is that she appeared to tweak her lower back just before the second set tiebreak against Kuznetsova – the Frenchwoman was able to win in straight sets, but i’d be interested to see whether that becomes an issue on Saturday.

While Halep won this title last year, defending it (with what would be six match wins) would be a magnificent achievement. This season has drawn remarkable similarities to her 2016 season – after an injury-affected start to the year, Halep has settled into a smooth groove and fully fit, has burst into life on the clay She is still taking on board the advice of her coach, Darren Cahill at the changeovers, but there has been a notable change since Miami in trying to work out things for herself on the court.

Halep has been building her bar of confidence match-by-match, holding firm against Roberta Vinci and Sam Stosur in tight three setters, and then playing a mostly clutch match against Sevastova in the semi-finals. As her belief and assuredness rise, Halep has become more comfortable in going for her shots and taking on the forehand. This will be key, along with getting returns into court against Mladenovic’s fabulous first serve, if she is to counteract the negative head-to-head.

I say it a lot but i’m honestly torn on this one.