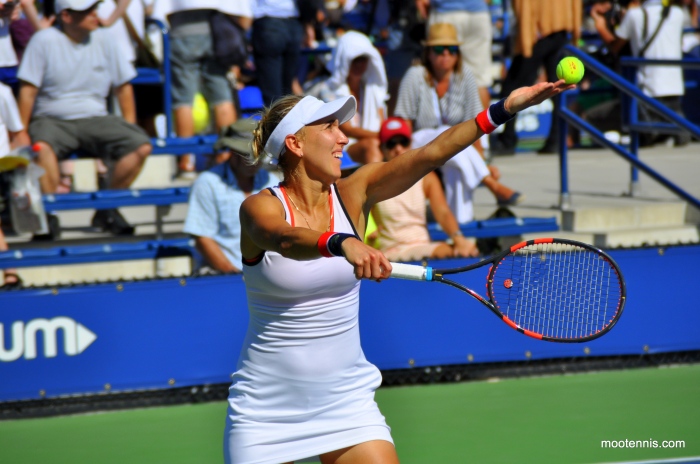 The final match of the 2017 BNP Paribas Open will be an all-Russian affair as the number eight seed, Svetlana Kuznetsova will play the number 14 seed, Elena Vesnina. Kuznetsova is back in the final of Indian Wells for the first time since 2008, while Vesnina has broken new ground and will compete in the biggest singles final of her career so far.

Take a bow, Elena! The 30-year-old has had a tremendous week, backing up wins over Angelique Kerber and Venus Williams with a straight sets triumph over another in-form player in Kristina Mladenovic. Vesnina came out of the blocks fast, racing into a 5-0* lead and going to town on Mladenovic’s second serve. While she threw in an error-strewn game serving out the set at *5-1 with a couple of errors and a double fault down break point, second time round, Vesnina served out to love.

Vesnina had the 5-1* lead again in the second set and even chalked up a match point on Mladenovic’s serve – the Frenchwoman battled on with her best spell of tennis in the match, producing some breathtaking tennis up at the net. Like the first set, Vesnina needed two bites of the cherry and successfully served out the match to 15 to reach her first Premier Mandatory final.

Take a bow, Sveta! In a high quality match, Kuznetsova produced another terrific performance to inflict just a third defeat on Pliskova this season. Kuznetsova’s retrieval skills in this match were magnificent and not only did she chase balls down, but she often managed to turn it around and claim the points with winners. Another impressive aspect of Kuznetsova’s game, not just today but all tournament, has been the serve and the variation she is using with it. The second serve held up well and the Russian player dropped just three points behind the first serve in the second set.

Pliskova missed some key forehands at the ends of both sets – having broken Kuznetsova when she served for the set, Pliskova had an opening up 6-5 30-30 and was just two points away from the set. Two missed forehands, one off the drive volley, helped Kuznetsova get to the tiebreak where she dominated proceedings. The same was the case in the second set tiebreak where a trio of misses off the forehand side were Pliskova’s undoing. It was a super smart display from Kuznetsova and the forehand passing shot winner she produced on set point at 6-5 in the first set was stunning!

Press conferences: As always, loved the insight from Sveta and Elena.

.@EVesnina001 on going from 1R qualies last year to the final this year.

“Think about your game, not about your points.” #BNPPO17 pic.twitter.com/yvYC2kHvbg

Head-to-head record: Surprisingly, the pair have played just twice before on the WTA tour. Vesnina won their first encounter in Dubai back in 2009, 6-4 3-6 6-0, while Kuznetsova prevailed in their most recent encounter in 2014 on Oeiras on clay, 6-3 6-1.

Previous records: As alluded to in my draw preview, Vesnina had never made it past the third round of Indian Wells in nine previous attempts. She had only won back-to-back matches in the desert once before and fell in the first round of qualifying last year to Julia Boserup. For Kuznetsova, she’s had a similar drought of success in the desert since reaching back-to-back finals in 2007 and 2008, and had a 5-8 W-L record since 2008.

Final thoughts: I tip my hat to Vesnina and what she’s doing on the tennis court right now. After her best ever year in 2016 and with a new elevated ranking, I thought she might have a tough time backing it up and that a drop in the rankings was inevitable. On the contrary, she has actually gone from strength-to-strength and i’m delighted to see that because she is one of the nicest and most genuine players on the tour.

This will be the biggest singles final of Vesnina’s career and you never quite know how a player will respond to the occasion. Another factor could be that she has played her last three matches in the late afternoon/night so will need to adjust to playing early in the sun – the last singles match she played during the day session was against Timea Babos where she was struggling with the heat. She said in her post-match interview after beating Babos that she was feeling ill and probably hadn’t drunk enough before!

Kuznetsova is rolling back the years and in a similar case to the one presented above for Vesnina, she’s building on last year’s success. I thought that Kuznetsova may struggle to replicate what she achieved in Singapore and as a whole in 2016, but the quality is there and while up till now, it had been solid yet unspectacular, she’s managed to find a consistent level throughout all her matches to make this deep run.

It’s an unexpected final but both players have beaten quality opposition and played some terrific tennis to get this far – they’ve opened up the draws themselves by beating higher ranked opposition. I’m almost tempted to go against my instinct (been a woeful week for predictions 😂😂😂) but, in my opinion, experience, conditions and the consistency on serve tip the scales in favour of Kuznetsova.