After a weekend of Fed Cup, the WTA tour returns next week in Doha at the Qatar Total Open. Doha and Dubai switch their tournament statuses each year and in 2017, Doha is the lesser-Premier tournament with a 28-player draw. Still, it’s a cracking draw with the original main draw cut-off at #30 and five of the world’s top ten in attendance including Angelique Kerber, Karolina Pliskova and Dominika Cibulkova. Let’s take a look at the draw…

Angelique Kerber is the number one seed in Doha and has a bye into the second round. Kerber endured a pretty crushing January, posting a 4-3 W-L record and losing her position at the top of the rankings. This could be a blessing in disguise for Kerber with some of the pressure and expectation perhaps lifted off her shoulders. Her game appeared inhibited in the first few weeks of 2017 with a noticeable decrease in speed on the serve and her groundstrokes lacking punch.

Kerber’s draw could face an all-too-familiar route with a potential second round match against Daria Kasatkina. The 19-year-old Russian scored the biggest win of her career over Kerber in the first round of Sydney last month, 7-6(5) 6-2. For a repeat match-up, Kasatkina would first have to get past Irina-Camelia Begu, a feat she has already managed in 2017 following a comfortable win over the Romanian player in Brisbane. Begu has lost seven of her last eight matches.

Timea Bacsinszky sneaked a seeding after the withdrawals of Svetlana Kuznetsova and Carla Suárez Navarro. This hasn’t necessarily aided her draw with a Doha rematch on the cards with Yulia Putintseva. The pair played at this tournament last year with Bacsinszky winning in straight sets, 6-2 7-6(0). Bacsinszky had a brilliant weekend in Fed Cup, winning both her singles matches. The Swiss player had a medical time-out in her three hour-20 minute win over Kristina Mladenovic and had ice on her knee at the end so her participation in Doha may be up in the air as Bacsinszky is normally a smart scheduler. If she does make the trip, Bacsinszky will face a stern challenge against the steadily improving, Putintseva, who had a superb week in St. Petersburg and didn’t drop a set in Fed Cup action last week.

The winner of Bacsinszky-Putintseva will get Monica Puig or Laura Siegemund in the second round who have combined for just one match win on the WTA tour so far in 2017. Worth a mention is that Siegemund is in Fed Cup action this weekend in Hawaii… a long way away from Doha and a 13 hour time difference!

A familiar rivalry could get another installment in Doha with Agnieszka Radwanska and Caroline Wozniacki on collision course to meet in the second round. The pair played each other three times during last year’s Asian Swing with Radwanska winning their last two matches in straight sets. Radwanska gets a bye in the first round, while Wozniacki will have to get past Kiki Bertens. The Dutch player went 1-1 in Fed Cup against players ranked outside of the world’s top 100. Wozniacki won their only previous match in Montreal in 2012 and it’s a match-up, based on Berten’s wayward recent form, that would likely favour Wozniacki.

Elena Vesnina and Roberta Vinci will both face qualifiers in the first round of Doha. Vesnina is currently ranked at a career high 15 in singles and has made an astonishing jump up the rankings in the last year; she was a qualifier in Doha last year! Vinci continues to plough on in what is set to be her last year on tour. Her start to the year has been decent with two quarter-finals. Landing in Vesnina’s section offers a decent opportunity to make it three in Doha. 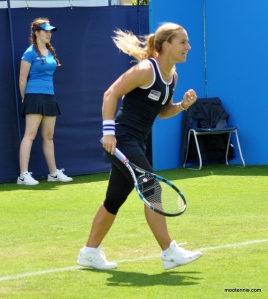 Dominika Cibulkova heads up an intriguing third quarter of the draw that features the likes of Barbora Strycova, Anastasia Pavlyuchenkova and Sam Stosur. Cibulkova won two matches at the Australian Open and St. Petersburg, but suffered surprising three set losses to Ekaterina Makarova and Yulia Putintseva respectively. Both felt like matches that Cibulkova would have gritted her way through in 2016 but confidence looks to be flagging a little as she comes to terms with her new elevated ranking of number five in the world.

First up for Cibulkova in Doha will be Anastasia Pavlyuchenkova or a qualifier in the second round. Pavs is a match for anyone on her day so that would be a competitive match with perhaps a slight nod to Cibulkova based on their recent encounters. Strycova has drawn the regulation Doha wildcard, Fatma Al Nabhani in the first round. In eight previous appearances in qualifying and the main draw, Al Nabhani has never won a set – the closest she came was against Peng Shuai in 2012 where she pushed the second set to 7-5.

If Strycova, who was in Fed Cup action this weekend, does make it to the second round she will play Sam Stosur or Anastasija Sevastova in the second round. Stosur snapped a nine match losing streak in Taipei City but still hasn’t looked entirely convincing. Sevastova will be seeking her first ever main draw win in Doha having missed a match point against Eugenie Bouchard at this stage last year. The pair are tied at 1-1 in their head-to-head.

Karolina Pliskova has made a very encouraging start to 2017 with one title and a second Slam quarter-final to her name. Many were touting Pliskova as a first Slam winner at the Australian Open; playing Mirjana Lucic-Baroni in the quarter-finals appeared a prime opportunity on paper to delve even deeper in the draw but things didn’t quite pan out for the Czech player. A quarter-final appearance was still a best ever showing at the AO and she did well to escape an ominous position in her third round match to Jelena Ostapenko, down 2-5 in the third set.

The allure of the fourth and final quarter is a potential quarter-final and Fed Cup rematch between Pliskova and Garbiñe Muguruza. Pliskova rather comfortably saw off Muguruza on Sunday in Fed Cup action, 6-2 6-2. Pliskova may have to get past Caroline Garcia in the second round of Doha which hasn’t proved a straightforward match in the past; all three of their previous encounters have gone the distance and Garcia has won their last two.

Muguruza plays Cagla Buyukakcay in the first round and is projected to play Zhang Shuai or Timea Babos in the second round. Buyukakcay and Babos have both yet to win a match on the WTA tour this year although Babos did enjoy a crushing win over Ana Konjuh in Fed Cup last week, 6-1 6-2 in just 56 (!) minutes.

The top two seeds, Angelique Kerber and Karolina Pliskova both have negative records in Doha; four of Kerber’s five victories in Doha came during her run to the final in 2014. She has lost her last three matches at the Qatar Total Open, all in straight sets. Pliskova’s last match in Doha was an absolute shocker, losing to Margarita Gasparyan, 1-6 1-6 in just 49 minutes. Agnieszka Radwanska has the most consistent record of the seeds but has never made it past the semi-finals, falling at this stage five times including last year.

I feel like I say this for every tournament but there are many uncertainties this week with quite a few players heading to Doha from a weekend of Fed Cup. February produced many upsets last year so i’m bracing myself for some shocks and withdrawals! Kerber still remains a question mark but she seems to be speaking a good game in press and i’d fancy her to get the better of Kasatkina if the pair were to play again in the second round.

I’d take Radwanska or Wozniacki to the final from the top half, and i’m currently feeling the latter. I think the medium-paced court will benefit Wozniacki. She has been training in Doha for a few days now and should be well prepared compared to those players coming from Fed Cup.

From the bottom half, the potential Pliskova-Muguruza quarter-final could be the decisive one. Pliskova seems to have the Muguruza match-up all sorted and has looked on the money in 2017 so far so is my safe pick as champ. I’m not high on Cibulkova right now so I would fancy Strycova to be a dark horse in this draw.

Who do you think will win Doha? As always, comments are appreciated!