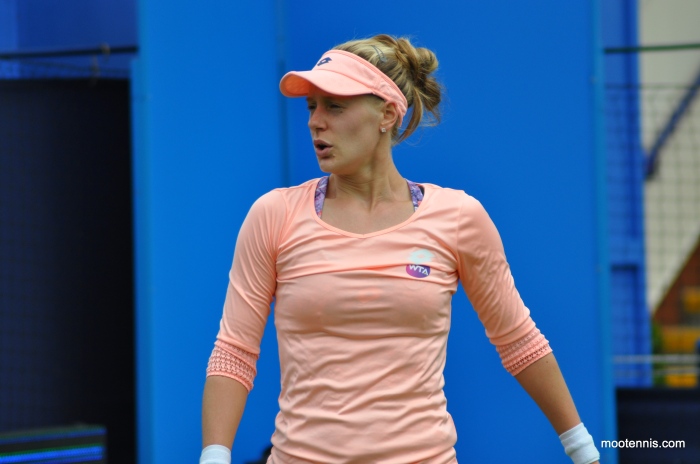 Second round action will commence at the 2017 Australian Open on Wednesday with the number 20 seed and 2016 quarter-finalist, Zhang Shuai taking on the Shenzhen finalist, Alison Riske. Nicely nestled in a favourable section of the draw, the winner of this match will fancy their chances of reaching the second week.

Both Zhang and Riske won their Australian Open first round matches on Monday in straight sets; Riske beat fellow compatriot Madison Brengle, 7-5 6-3, while Zhang powered past Aliaksandra Sasnovich, 6-0 6-3 in just 50 minutes. Riske’s win over Brengle wasn’t entirely straightforward as she fought back from an early break down and saved a set point in the first set before enjoying a more comfortable second set.

Zhang looked superb against an albeit error-strewn opponent who committed 23 unforced errors. Zhang was striking the ball nicely and moving her opponent around effectively. She also relied on her first serve, serving at 81% (!) first serves in and winning 82% of points behind it.

.@Riske4rewards gets a big first round win at the #AusOpen! pic.twitter.com/iFtSY4CAkM

Head-to-head record: Zhang and Riske are tied at 2-2 in their head-to-head although Riske’s most recent win came via a retirement in Limoges in 2012. Their last encounter was a quality match where Zhang prevailed in a third set tiebreak in front of her home crowd of Beijing, 6-3 4-6 7-6(4).

Interesting stat: Via the tweet below, Riske has snapped a nine (!) match losing streak at the Slams. Her last win at a Slam was all the way back at Wimbledon in 2014 against Camila Giorgi.

Final thoughts: Based on their games, respective form and their most recent encounter, this should be a very evenly contested match. Zhang has history in Melbourne after reaching the quarter-finals last year as a qualifier and showed no signs of nerves in her first round win. For Riske, she is just three spots off her career high ranking and has reached the final at her last two tournaments prior to the Australian Open in Tianjin and Shenzhen.

It’s a really tough one to call but i’m going to side with Riske. I think that snapping that losing streak in Slam matches will have been huge for the American and she’s already playing with confidence after an excellent opening week of the year in Shenzhen.