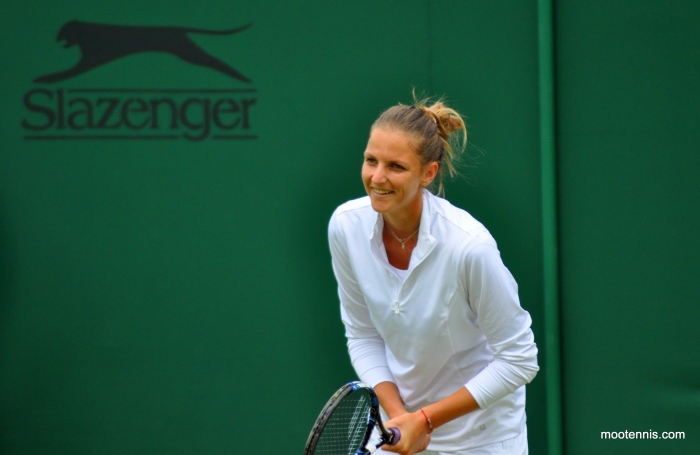 The white group at the 2016 WTA Finals got off to a fabulously frenetic start on Monday with Karolina Pliskova and Svetlana Kuznetsova winning dramatic three setters, each saving a match point. Pliskova and Kuznetsova will meet in the first of Wednesday’s matches in Singapore and will be followed by a tantalising encounter between Agnieszka Radwanska and Garbiñe Muguruza in their first match-up since their semi-final in Singapore last year.

In another match-of-the-year contender, Kuznetsova and Radwanska covered every corner of the court in a wonderful display of all-court tennis and variety. Kuznetsova saved a match point for the second consecutive meeting with Radwanska to prevail in a brutal encounter that lasted two hours and 48 minutes. All eyes were on Kuznetsova early doors following her recent schedule that has seen her yo-yo between Asia and Europe, culminating in a ten hour flight from Moscow to Singapore on Saturday night. Kuznetsova looked weary as a smart Radwanska characteristically mixed up the play and kept the unforced error count low to go up 4-1.

Kuznetsova though was just getting going… it was taking a lot of effort against a resistant Radwanska to win points but she won a majestic rally at 1-4 40-40. The Russian player was hitting the ball with real conviction and won five out of the next six games; Kuznetsova crucially broke Radwanska at 5-5 with a gorgeous backhand down-the-line and a passing shot winner. Radwanska had little joy at the net in the first set, winning just 4/12 points… Kuznetsova served it out on her third set point, 7-5.

Radwanska rebounded nicely in the second set, breaking Kuznetsova in all three of her service games and being much more effective at the net – in fact, she won all nine points she played coming forward. Radwanska was up a break on three occasions in the third set but just couldn’t fend off Kuznetsova. Even with Radwanska’s craft and trickery, she struggled to put away Kuznetsova who chased down so many balls in what was a typically athletic and versatile display.

Radwanska broke at 4-4 in the decider, smacking a backhand winner away as Kuznetsova was unable to maintain the necessary depth on her groundstrokes. Radwanska chalked up a match point at *5-4 *40-30 – she barely landed her second serve in and then was slow to react with a tight backhand into the net. An overforced forehand into the net followed on the next point as Kuznetsova eventually broke back to 5-5.

Kuznetsova kept her cool at the end with more effective serving and neat volleying to wrap up the win on her third match point (having incorrectly challenged midway through the point of the first one!). It was Kuznetsova’s 13th career win over Radwanska.

The second match didn’t come close to the glorious shotmaking in the Radwanska-Kuznetsova match but did rival it for the drama. Pliskova won the last five games and saved a match point to win her fourth match in a row against Muguruza. Pliskova had looked in control in the early stages of the matches with not only a higher percentage of first serves in, but also winning a higher percentage behind it than Muguruza. Pliskova secured the early break in the second set but Muguruza gained a foothold in the match when Pliskova played a dreadful service game at 6-2 *3-2.

Muguruza toughed her way back into the match with some impressive defence, but also a helping hand from an increasingly erratic, Pliskova. Muguruza failed to serve out the second set but won a messy tiebreak with her renewed positivity. Pliskova became increasingly passive and looked a little weary in her footwork – it’s hard to really criticise when this match was being played at well gone midnight. Muguruza began to string together some glorious points in the third set, winning points up at the net and playing much the more dynamic tennis to take a 4-0 and double break lead.

In what felt like a pivotal moment, Pliskova sealed one of the breaks back in a wacky 15-minute, 8-deuce game that saw the Czech player make at least three correct Hawkeye challenges. Pliskova eventually broke… but Muguruza reacted with a love break in the next game to lead *5-2.

The Spaniard earnt a match point at *5-2 *40-30 but netted a slightly awkward volley. The nerves were evident and it was hardly surprising considering how few wins Muguruza has racked up of late, not to mention that she’s always been prone to wobbling at the ends of matches. Having looked rather flat and sluggish, Pliskova seemed energised after winning the long game in the middle of third set and produced an unlikely comeback, winning 16 of the last 20 points against a panicked and crumbling, Muguruza. This will be a tough one for Garbi to get over…

Pojd, with a capital P! @KaPliskova pulled off a major win today after being 2-5 down in the 3rd. pic.twitter.com/QbyuLjyQcd

Pliskova v Kuznetsova head-to-head record: In their only previous match, Pliskova defeated Kuznetsova in three sets en route to her biggest career title in Cincy, 6-3 4-6 6-2. On that occasion, Pliskova’s serve was the big difference between the pair.

Interesting stat: Kuznetsova’s win over Radwanska was her 21st (!) three set win of 2016.

Final thoughts: I think this court suits Kuznetsova better than Pliskova with her superb athleticism although Pliskova was still able to get some pop on the serve with 14 aces against Muguruza. Kuznetsova’s effort against Radwanska was admirable but I do still wonder what she has left in the tank… she’s human and what she has put her body through, both physically and mentally, is going to have an impact. My instinct for this match, despite the court surface, would be for Pliskova to win but frankly i’m terrified to pick against Kuznetsova!

Radwanska v Muguruza head-to-head record: Muguruza leads Radwanska, 4-3 in their head-to-head. The pair played five times in 2015 with Muguruza winning the first four (three of them in three sets) but Radwanska winning the most recent of those with a terrific semi-final display in Singapore, prevailing 6-7(7) 6-3 7-5.

Interesting stat: In her last three losses on tour since the US Open, Radwanska served for the match and had match points in two of them. Radwanska responded to the first two losses with straight set wins in her next match…

Final thoughts: Both players suffered crushing losses in their first matches but had different responses in press – Radwanska looked visibly sad, while Muguruza really tried to put a brave face on. Muguruza actually played some superb tennis at times over Pliskova but really fell apart in the crux of the third set. Radwanska played a better sustained match but finished with a couple of poor games at the very end. I’d fancy Radwanska to be the more resilient in this match…