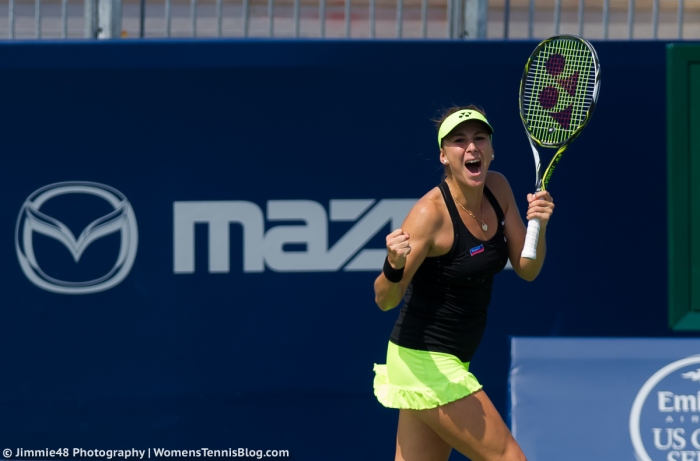 Waheyyyy… I’m all in for this fourth round match between Maria Sharapova and Belinda Bencic which will be the first match (boo) on Rod Laver Arena on Sunday. I had my eye on this match-up when the draw came out and i’m super happy that it’s become a reality. Both players were forced to three sets in their third round matches. Bencic was first up on Rod Laver Arena on Friday and came from a set down to beat Kateryna Bondarenko, 4-6 6-2 6-4. Bencic dropped just five points on serve in the final set and secured another decent win, particularly after Bondarenko had played so well in the last round against Svetlana Kuznetsova. Bencic has done well to scrap her way through a lot matches already in 2016, a sign of her mental toughness.

For Sharapova, a dropped second set tiebreak was sandwiched by a breadstick-bagel-combination. Sharapova beat Lauren Davis, 6-1 6-7(5) 6-0, and reacted well after a wild 77-minute second set which saw the pair combine for 53 unforced errors. Sharapova came into this Slam ‘cold’ having been forced out of the Brisbane International with a forearm injury but has once again demonstrated that she is one of the best at being able to compete at a major tournament without any warm-up tournaments.

Bencic is 15-0 in three-setters since Roland Garros last year.

Head-to-head record: What makes this match-up so exciting is that the pair have never played before on the WTA tour,

Interesting stat about Bencic: As per the tweet above, Bencic has won her last 15 three set matches which is a crazy stat! This stretches all the way back to Rome last year where she lost to Daria Gavrilova. Since then she’s won three setters against Mladenovic, Konta, Radwanska, Pironkova, Friedsam, Bouchard, Lisicki, Serena, Halep (via retirement), Doi, Stosur, Brengle, Lucic-Baroni, Makarova and Bondarenko, In seven of those matches, Bencic has come from a set down to prevail.

Interesting stat about Sharapova: In her last seven Grand Slams, Sharapova has lost at the fourth round on four occasions…

Analysis: You could tell in Sharapova’s post-match interview that she’s fully aware of the threat that Bencic poses. The Swiss player has racked up some big wins in her ascension up the rankings. While she’s taken a while to get her game going in 2016, Bencic has still been producing highly respectable results… BB knows how to win. One thing that has become apparent is that Bencic adapts well to situations, particularly having experienced a loss against a player. It will be interesting to see how she copes playing Sharapova for the first time. I’d fancy this to go the distance… while I wouldn’t be surprised if Bencic brings out her A-game and produces another big performance, I think Sharapova will be dialled in after dropping a set to Davis and ultimately pull through.