Here are my draw predictions which I decided to separate from the main preview since qualifying didn’t finish until Friday and New Haven on Saturday. I’ve also been waiting to see if a couple of players may withdraw. It’s going to be a fascinating week and thanks to Rukkus.com for the great Serena infographic below. For an interactive version click HERE

I’m going for Serena to win the Calendar Slam. It’s hard to imagine the pressure Serena will be under over the next two weeks but I honestly believe that if anyone can deal with it then it’s Serena. I’m sure there will be one or two matches where Serena is on the brink. As much as the pressure is on Serena, it will take an incredibly gutsy performance from anyone to beat her in New York. Serena won the French Open not playing close to her best and she did this to a degree in Cincy, taking advantage of a reasonably favourable draw but still beating two top 10 players along the way. The US Open has been Serena’s most consistent Slam in the last few years where she has reached the final in the last four years and been crowned champion in the last three. I felt after Wimbledon this was Serena’s and I haven’t changed my mind. 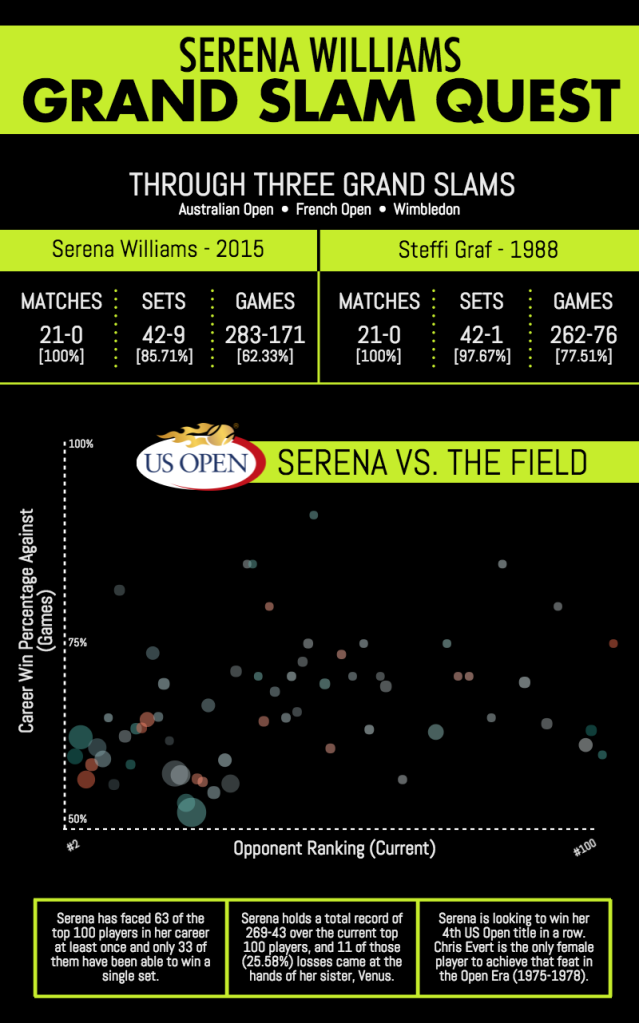 I’ve been predicting Azarenka to do well at quite a few tournaments this year although it hasn’t quite worked out for her. This is a risky one because Azarenka was forced to pull out of Cincy with a leg injury; however she’s been practising without any of the heavy strapping and when she’s healthy, has looked good this year. Half of her losses in 2015 have come against Serena or Maria. Not drawing Serena in her half is a big boost and I think the loss to Errani in Canada was a big wake-up call. I lingered between Azarenka and Safarova in the fourth round for a while but in the end, head ruled over heart. If Azarenka-Kerber happens in the third round, i’m finding it hard to see Angie winning that one with the head-to-head and the Angie’s struggles at getting past that stage of the Slams this year.

Originally, I ended up with Sharapova and Muguruza in my semi-finals… however i’ve been changing my mind left, right and centre. This is always a dangerous thing to do! In the third quarter, Wozniacki is the safest pick to the semis IMO. I’d love to see Kvitova do something after her superb performances in New Haven, but Petra is Petra and I could easily see her coming unstuck in an early round, perhaps scheduled in the daytime. I’m not entirely convinced by Wozniacki’s fitness with the leg injury although she has said in press that it’s fine. Wozniacki has a decent draw and although there are some seeded players who have done well at the US Open in her section, she has winning head-to-heads against them all.

The second quarter was a toss-up between Sharapova, Ivanovic and Jankovic. Originally it was Sharapova and she’d be my pick 100% if it wasn’t for the leg injury (*EDIT – Since writing this post, Sharapova has pulled out*. In the end, i’ve gone for Ivanovic. It all comes down to that first rounder against Cibulkova, which is a 50-50 match. If she gets through that then it’s a very favourable draw going forward. Otherwise, I quite like Jankovic’s chance to go deep…

There was much deliberation on the quarter-finalist from the first section… in the end, i’ve gone for Bencic. She did well here last year and that run in Toronto-Cincy was stunning. I’ve taken the plunge despite a potential third rounder against Venus where she is 0-3 in the head-to-head and 0-6 in sets. I do have to remind myself that Venus did go out to Sara Errani here last year and her recent form has been disappointing. Furthermore, Bencic has been superb at turning around losing head-to-heads and learning quickly what she needs to do to improve.

The second and third quarters are messing with my heads. I always get to this point where I end up completely overthinking everything and making a mess. Sharapova and Makarova are the two highest seeds in their section but both have injury concerns with Makarova not competing in the doubles. Perhaps they will be fine but i’ve gone for Mladenovic to come through. The safest pick is Svitolina but she could come up against a couple of big hitters including Kaia Kanepi which concerns me. Basically, I couldn’t decide so I thought screw it i’m going to be wild for once haha…

Petkovic may be struggling with a knee injury and has a tough opener against Caroline Garcia, but I do like this section of the draw for her and the way she has been playing. The other two seeds in her section, Garbine Muguruza and Petra Kvitova, she has good records against. Despite originally thinking Muguruza might go deep here, the recent news that she has split with her long-term coach was a surprise, particularly with the timing. Furthermore, she’s actually never won a match at Flushing Meadows…

Garbine Muguruza parts ways with coach Alejo Mancisidor after more than two years of working together.

Halep is the safest pick to the quarters. She turned her year around with superb performances in Canada and Cincy. I think she will do well here and the confidence from the past couple of weeks should spur her on. For some reason, which I can’t quite put my finger on, i’m not completely sold.

And here are my full draw predictions… I still enjoy doing this for every tournament even though my success has been very limited of late. That’s the nature of the game though with the WTA. I’m not a trader and do not bet on tennis at all, but I enjoy the challenge of trying to work out what’s going to happen. I’ll be putting all my daily predictions up as the draw unfolds which you can keep a track of HERE. Enjoy the next two weeks everyone… I’m going to try my best to cover this tournament with some gusto so please come back and see what mootennis.com has to offer! 😀

For further coverage of the US Open, check out the Moo’s Tennis Blog Facebook and Twitter pages.