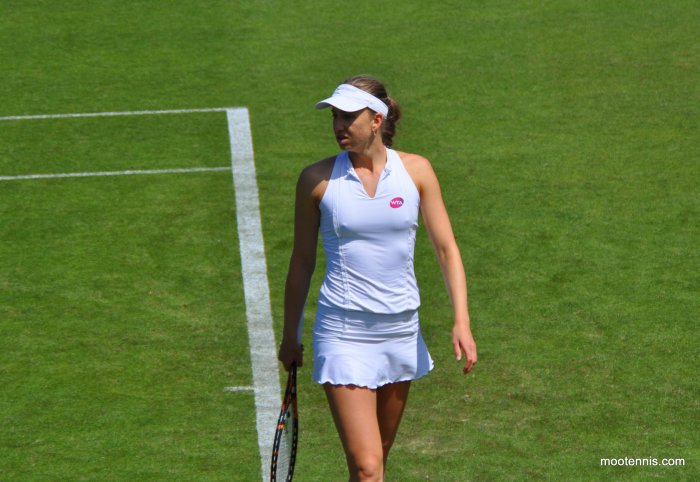 In an all-German affair, Andrea Petkovic and Mona Barthel will meet in the second round of the Bank of the West Classic in Stanford on Wednesday. Petkovic recovered from a slow start in the first round to defeat another German player, Carina Witthoeft, 5-7 6-1 6-3 in one hour and 59 minutes. Petkovic, who hasn’t posted on social media for a while while she concentrates on her tennis, had a solid enough grass court season considering it isn’t her favoured surface. It wasn’t a surprise to see her start slowly against Witthoeft as she often does after a long break but if she can keep building wins, she’s more than capable of producing some excellent results on the hard courts. Thanks to @Petko_no1 on Twitter for posting Petkovic’s full press conference after her first round win. I could listen to Petko speak for hours, she is captivating.

Barthel has had an injury-affected year but seems to be back to full fitness. Barthel snapped a nine match losing streak in Bastad where she reached the final and then comfortably won her first match in Stanford against Carol Zhao, 6-3 6-0. Barthel has shown only glimpses of what she is capable of this year; the best match i’ve watched her play was in Charleston where she edged Sloane Stephens in a high quality second round match. However, characteristic of her year, she lost nine straight games against Lauren Davis in the next round (from 4-0 up in the first set) and was then forced to retire due to illness.

Petkovic beat Barthel in their only previous match in Washington back in 2013. I’d fancy Barthel to win at least a set as Petkovic is still easing her way back into action. If this had been a first round match match, I would have gone for Mona. However, Petkovic has one match under her belt and I think her fighter instincts will pull her through this one. I like both players so i’ll be happy whoever wins.