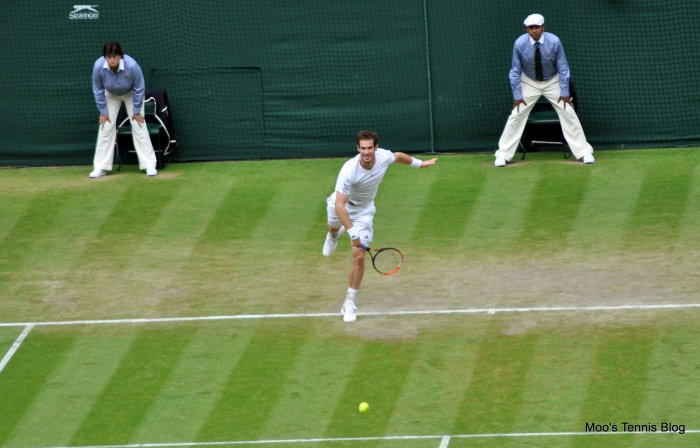 Novak Djokovic and Andy Murray will contest the Australian Open for the third time in their career when the pair meet on Sunday to wrap up the 2015 Australian Open Championships.  Murray was first into the final with a four set victory over Tomas Berdych, 6-7(6) 6-0 6-3 7-5.  After a feisty opening set in which Berdych saved a set point, Murray was pretty pumped up.  He cleaned up his game producing 30 winners and 21 unforced errors in the final three sets and winning a higher proportion of points on his second serve.  There were some fun moments in this match…  Kim Sears managed to make the front page of many British newspapers this morning! Murray’s post-match interview where he discussed coach Amelie Mauresmo was brilliant.

In the second semi-final on Friday evening, Novak Djokovic and Stan Wawrinka produced another five setter… however, it didn’t come close to matching the quality of their two previous epics in Melbourne.  In fact, the general tennis world was in a state of befuddlement at the match, which was widely labelled as “strange”.  In the end, Djokovic won, 7-6(1) 3-6 6-4 4-6 6-0 in three hours and 30 minutes.  The stats pretty much tell the story… the pair produced 69 winners to a whopping 118 unforced errors.

Like the women’s final, this match-up is not doing much for me.  I’ve always struggled to get excited about Djokovic-Murray matches.  There has been the odd classic in their previous 23 match-ups; their semi-final at the Australian Open in 2012 was fantastic, finishing with an absorbing final set.  Djokovic won the match, 6-3 3-6 6-7(4) 6-1 7-5 in four hours and 50 minutes.  Their final in Shanghai in the same year where Djokovic saved a string of match points was also great.  In 2014, Djokovic won all all four of their encounters.  The three ATP encounters all ended in straight sets.  Murray got a set in their last Slam outing at the US Open.  For two sets it was close before Djokovic took control of the final two sets to win, 7-6(1) 6-7(1) 6-2 6-4.

Of the pair, Murray was much the better player in the semi-finals… but that doesn’t automatically mean that Murray is going to win this final.  Djokovic was well below his best against Wawrinka, but he won the match and that’s all that really matters.  I would definitely expect Djokovic to up his game for the final.  His record over Murray has been dominant of late and although I think it will be much, MUCH closer than their previous matches, I’d still favour Djokovic to come through.  I’ll be cheering for Murray though!